After an almost 4 year-hiatus, on 4 September 2020, Kosovo and Serbia reached the Agreement on Economic Normalization in Washington D.C. This agreement marked a new dimension of the process with the U.S. as a mediator.

In line with the agreement, Kosovo and Serbia came to terms of implementing the Belgrade – Pristina highway and rail agreement, signed on 14 February 2020 at the Munich Security Conference.

They further agreed to work with U.S. International Development Finance Corporation (U.S. Development Bank) and EXIM (The official export credit agency of U.S.) on memorandums of understanding to operationalize:

Both Kosovo and Serbia agreed:

Two clauses of this agreement, however, were just a renewal of previous commitments:

The need to renew these commitments came as a result of their non-implementation. So, the construction of Merdare Crossing Point facility was completed in line with the IBM agreement and implementation plan, however Serbia had refused to use the new facility. After signing the Washington Agreement, Serbia agreed to move its staff to the Merdare Common Crossing Point facility, respectively in October 2020.

This so called “Washington Agreement” is dedicated to economic normalization, nonetheless specific articles caught the attention of everyone seeing that they go beyond the scope of economic relations between the two countries.

In this respect parties agreed:

Kosovo and Serbia did not sign the same text. The last clause of the agreement was adapted for each of them separately. 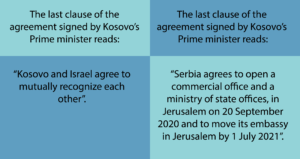 Inter-ethnic reconciliation is still a long way off in Kosovo…

Kosovo-Serbia dialogue: A catch-22 or a dead-end